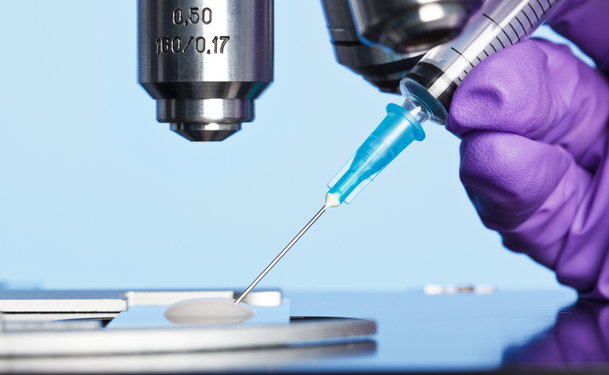 Intracytoplasmic sperm injection (ICSI) is a procedure used with in vitro fertilization (IVF) in which a single sperm is injected directly into a mature egg. The embryo is then transferred to the woman’s uterus or fallopian tube. The first baby conceived with ICSI assistance was born in April 1991.

Who is a candidate for Intracytoplasmic Sperm Injection?

ICSI is often used in cases of severe male infertility. In order for sperm to fertilize an egg, the head of the sperm must attach to the outside of the egg and push its way through the outer layer to the inside. For couples with serious problems related to sperm production or motility, ICSI has demonstrated success.

Because ICSI relies on a healthy egg, most of the recommendations for this procedure pertain to patients with male infertility problems.

In the past, ICSI had been used more broadly. In December 2012, the Practice Committees of the American Society for Reproductive Medicine (ASRM) and Society for Assisted Reproductive Technology (SART) issued an opinion saying there's no evidence supporting the routine use of ICSI for factors other than male infertility.

What to expect during ICSI?

As with traditional IVF, the woman’s ovaries are stimulated with medication so mature eggs develop. Ultrasounds are used to monitor egg development, and once they're ready for harvest, they are aspirated during a transvaginal ultrasound-guided procedure.

Sperm is retrieved or extracted from the male donor. If necessary, several sperm-extraction methods are available. The sperm can also be frozen and saved until the eggs are ready.

When you are ready for the procedure, your doctor will:

Within about three days following the procedure, your doctor will check your eggs for fertilization. Once fertilized, your doctor will implant the resulting embryo into your uterus or fallopian tube. Often, more than one egg is successfully fertilized. In these cases, you will have the option of freezing additional embryos (cryopreservation) for future IVF cycles.

What are the risks associated with ICSI?

Risks associated with ICSI include damage to the egg from the needle used in the sperm injection. Also, the egg might not grow into an embryo even after being injected with the sperm, or it might stop growing. If fertilization does occur, the likelihood of a couple seeing the pregnancy to full term and to giving birth to a baby, or to multiple babies, is no different with ICSI than with conventional IVF.

Birth defects resulting from the use of the ICSI procedure are rare. According to the ASRM, experts believe far fewer than one percent of children conceived_x001d__x001d_ with this method have a birth defect. Some of the defects that have been associated with ICSI include:

If there are genetic causes for a couple’s infertility, then boys conceived through ICSI may also face infertility problems as adults.

What is the success rate for ICSI procedures?

ICSI leads to successful fertilization in 50 to 80 percent of cases.

How much does ICSI cost?

ICSI will add anywhere from $1,000 to more than $1,500 to the total cost of IVF. Some insurance companies will cover all or part of that expense, though many will not.